This is your brain on dominoes My husband and I have never been much into games. One year he gave me Scrabble for Christmas because he thought we needed to do more things together. We played it once.

But - we now know that games like Scrabble and dominoes are good brain exercise. So dominoes is our game of choice, and there is a lot of trash talk during the play. We laugh a lot, which is also good for our health, over the various accusations ("false play," "taking advantage of a guy with memory problems," etc.). And for a guy with memory problems, my husband does pretty well. Occasionally, he gets very lucky (it's luck, I tell you, not my lousy playing!) and I have to keep picking dominoes from the bone yard to find something playable. This game I felt obligated to document: he ended up winning by 81 points. Eighty. One. This is not a normal score. Mostly it's one or two dominoes' worth of points. Who is being taken advantage of here?
Posted by Ginnie 3 comments: The snow advisory started at six this morning, but the snow held off until about 8:00. After lunch, Quincy and I went out to investigate. The snow we got before Christmas had mostly disappeared by Christmas Day - in fact, we had a beautiful sunny day.

But now we're getting that Christmassy look again. It's days like this that I really appreciate being inside, and knowing how very, very fortunate we are to have a warm and cozy home.
Posted by Ginnie 1 comment:

We received a Christmas card the other day
from a couple in a support group we recently joined.

Nice picture on the card.
Look - Cute little snowmen and angel and snowflake decorations
fell out of the envelope. But what's this small red card? Yes, it does.
And more.
It says,
"The wages of sin is Death" On the other side of the card is a lot of fine print, beginning with
"The penalty for sin is separation from God forever in hell.
Go through just five commandments to see if you're a sinner*." This definitely takes the prize for
Oddest Juxtaposition of Concepts
in a Single Christmas Card.

Now that I take another look at the snowmen,
are those muskets they're holding? *Doesn't this sound like a Publisher's Clearing House flyer?
"Check these five numbers to see if you're a winner!"

Yesterday, our church secretary put out a plea for volunteers
to help with an assortment of papers that needed to be collated, folded, labeled,
and/or mailed this morning.
The Friday folding crew, who handles the Sunday bulletins,
is typically two or three people.
But today's task included not only the Sunday services,
but also two multi-page bulletins
for the two Christmas Eve services
(complete with all prayers, readings, and hymns, instead of just referring people to the prayer book and hymnal page numbers),
the Christmas morning service, our January newsletter,
and the pledge envelope boxes to be labeled with names.

About a dozen people showed up ranging in age from high school
to well beyond eighty,
and we got the work done in less than two hours.

And got mimosas to boot.

We don't really buy into the "your reward will be in heaven" stuff
when a bottle of champagne and some o.j. is so near to hand
at the local market.
Posted by Ginnie No comments: This isn’t the first time. He had a very rough summer, health-wise.

The last time he stopped eating, in August,
I had to encourage him.
Strongly.
With syringes of baby food.
And then syringes of a prescription dog food
that looks a bit like pate.
(To say nothing of trips to the vet, and many tests,
and much medicine.)

After a while, I figured out that if I put a spoon of food
in front of his nose,
eventually he would lick it.

So I changed my tactics to the spoon method,
as it was really hard to get the syringes filled.

But, oh, it was messy! would end up with nearly as much of the pasty dog food on his fur as I got down his throat. And it was very sticky. And hard to clean off of him.
So then I figured that if I put a cloth napkin around his neck,
it would keep a lot of the food off his fur. And if I put an apron on,
it would keep a lot of the food off my clothes. So today we’re back to the coercion method of nourishment. The good news is that the vet called this morning and said that ’s blood test results look good, so we’re hoping the shot of medicine he got at the vet yesterday, plus some TLC/force feeding will get him back on track. This little red-outfitted sweetie is a handmade miniature of a doll that belonged to my older sister. (And I was lucky enough to have one, too.) The doll was a Christmas version of the Rose O’Neill Kewpie doll, all dressed in red. You can see the little bumps on her shoulders made by the wings under her jolly red suit. The trip to the downtown Marshall Field’s department store to purchase the doll (my sister loved them so much she wore them out, and they had to be replaced several times over the years) was part of the Kewpie mystique. My doll is long gone, but when I got my first home and was decorating my first Christmas tree, my sister Carlie stitched up this tiny rendition of her beloved doll for me to hang on my tree each year. I’m always so glad to see Kewpie’s smiling face when I unpack the ornaments in December. (And in the photo she's being kept company by a pine cone angel I got at a Brownies Christmas party when I was 7.)

Once Thanksgiving is over, it's customary to put away
all the autumn decorations
and get out the Christmas stuff
(though some in our neighborhood
turned their Christmas lights on 2 weeks ago),
but I'm reluctant just yet to let go of the look of fall. Maybe because Thanksgiving was so early this year;
maybe because of the beautiful bittersweet from Wisconsin or
the pie pumpkin from our CSA farmer. And maybe it's time to dust. (Can you see the dust on that table?!)

My husband's daughter K sent us a package of goodies
from the Netherlands
to help make our St. Nicholas party authentic.
Music A package of Flags on a Line And a postcard with a note I'd show you the gift tags, but they're not very PC.
Black Pete, a Moor and assistant to St. Nick,
is always portrayed in a cartoonish blackface kind of way.
I don't think it would fly very well here.
But it seems to be OK in Holland.

Posted by Ginnie No comments:

We spent a lovely afternoon and evening with family on Thanksgiving. The next morning, my husband said, “I really had a wonderful time.”

I can’t always gauge how things are with him, whether he’s just enduring a social event for my sake or actually enjoying it. And I hesitate to ask, sometimes. So it was good to have him volunteer it.
Posted by Ginnie No comments: 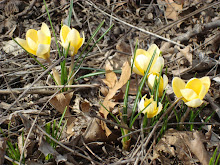